Bal Thakrey Biography: You probably know Bal Thackeray, the Hinduist and Hindu Heart Emperor of India. Even though he is not there today, everyone still remembers him with the principles of his politics. Bal Thackeray founded a nationalist party named Shiv Sena. Along with the leader, Thackeray was also a cartoonist. Shri Thackeray has also been a good painter.

Shri Bal Thackeray started his journey as a cartoonist. Bal Thackeray used to publish pictures of politicians, sportspersons and other sections for English newspapers. Following in the footsteps of his father, Bal Thackeray founded the domestic party Shiv Sena in Maharashtra in 1966. Then later Thackeray used to bring out magazines in two languages ​​Hindi and Marathi.

He was the father of Saamana Marathi newspaper and Saamna Hindi newspaper. Who sees his sons Uddhav Thackeray and Aaditya Thackeray today. Shri Bal Thackeray always became the talk of the newspapers due to his candid words and controversial statements. Shri Bal Thackeray breathed his last on 17 November 2012 at his Matoshree residence in Mumbai on the time of Diwali.

Bal Thackeray was born on 23 January 1926 in Pune Maharashtra. His father Shri Keshav Chandraseniya belonged to a normal family. His father was a social worker and also a good writer. Gradually, he energized the Marathi people towards Maharashtra and mixed Hinduist ideas. He contributed a lot in making Mumbai the capital of Maharashtra.

Balasaheb was married to Smt. Meena Thackeray. They had 3 sons. The eldest son Bindumadhav died in 1996. Bindumadhav has two brothers, Jaidev and Uddhav Thackeray. Mr. Thackeray made his livelihood as a painter in his early days. In the 1960s he started the weekly Marmik of the cartoon with his brother.

Shri Balasaheb Thackeray ji founded a hardline Hinduist organization of his own in the state of Maharashtra in 1966. This organization was named Shiv Sena. The election symbol of this party is bow and arrow and the color of the party’s flag is saffron. Initially, Mr. Thackeray did not get much success but Shiv Sena was moving towards the destination of its power.

In 1995, there was an alliance between Shiv Sena and Bharatiya Janata Party and it was decided that both the parties would stand together in the politics of Maharashtra. In 2005, Bal Thackeray gave more importance to his son Uddhav Thackeray in the party, due to which Raj Thackeray, the son of the second brother of the family, started getting angry with his uncle.

Raj Thackeray cut his way from Shiv Sena and formed his own party named “Maharashtra Navnirman Sena”. In 2006, a party called MNS emerged. Raj Thackeray also used to make sharp and provocative statements like his uncle. Due to which many cases were also registered against him.

A Marathi film has also been made on Bal Thackeray, which came in the name of 2015 “Bal-kadu”. Balasaheb Thackeray’s personal life and his ideals have been depicted in this film. This film was released on the occasion of Balasaheb’s birthday. Recently, a Hindi movie is going to be made on Balasaheb Thackeray, in which Nawazuddin Siddiqui is acting.

In the last days of his life, Mr. Thackeray’s health continued to deteriorate, due to which he was admitted to Lilavati Hospital in Mumbai on 25 July 2012. On 14 November 2012, Mr. Thackeray gave up food and drink in the hospital. He was then discharged from the hospital and made this news breaking news in the news bulletin. Later he was treated at home and he was kept alive with the help of oxygen. 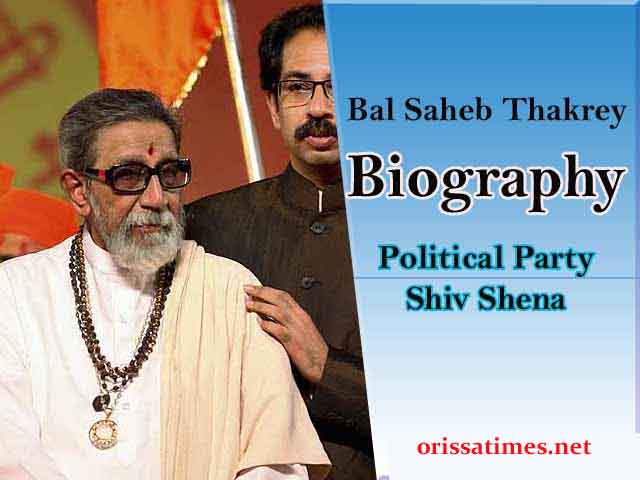 His fans used to have long lines of hundreds of people inside and outside the Matoshree house in Mumbai. Despite having all the facilities, he could not be saved and on 17 November 2012 he breathed his last in Mumbai Matoshree. Condolence messages started coming from this news not only in the country but abroad. Bal Thackeray was cremated at Shivaji Park (Dadar) in Mumbai.

In this journey, lakhs of people walked from Matoshree’s house to Shivaji Park. With full state honours, Shri Thackeray, wrapped in the tricolour, was given a final farewell at Shivaji Park. This last action was telecast live by the media of the country. Millions of people saw this last darshan with the help of their television and with the help of social networking.

People from politics, from Bollywood and other business were present at Shivaji Park Dadar in this last darshan. On this occasion, Advani, Sushma Swaraj, Jaitley, Gadkari, Maneka Gandhi, Sharad Pawar and Amitabh Bachchan from Mumbai himself, who went from Delhi to Mumbai, bid him farewell with their moist eyes.