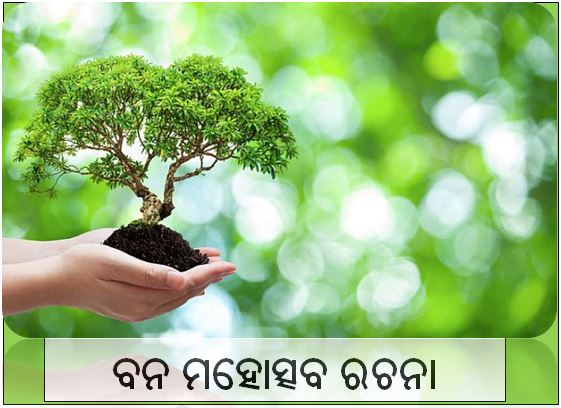 Bana Mahotsav Essay in Odia, odia essay van mahotsav, bana mahotsav essay in odia pdf download. Introduction: Water grows from trees, from water to grain, from grain to civilization and from life, he said. But sadly, modern humans have forgotten this fact. With the development of life and civilization, forests are beginning to be destroyed.

The forest has been cleared and villages and towns have been built. Large-scale deforestation is affecting industrial development. Its impact on forests has affected human society. Natural disasters are on the rise. Human beings regained consciousness as they went through a crisis. The forest festival has begun to protect the forest.

According to the National Forest Policy, our country should have 33.3 percent of forests. But now it is less than 22.8 percent. The average amount of oxygen produced by carbon dioxide from a medium atmosphere is estimated to be not less than Rs 5 lakh.

“But we are destroying our precious natural resources to build industrial factories, to build houses and furniture, to build railways, to create new farmland.” As a result, our civilization, the natural disaster, has to be faced.

Forest festivals have been launched in various parts of the world to protect the world from environmental pollution. The Government of India launched the Forest Festival in July 1950. The main purpose of the forest festival was to Collective tree planting, deforestation and the creation of new forests.

The use of forests is unparalleled, but deforestation is at the forefront of human endangerment. The President of India, the Vice President, the Prime Minister, the Governor, the Chief Minister, the Union Ministers and the Ministers of State are participating in the tree planting program to avoid this danger. “Every human being, every government department and every private institution needs to be aware of the need to raise awareness about the usefulness of trees.

It’s as if man is destroying the forest for his own good. The consequences are the same for human society. New forests need to be created to protect human society from this imminent danger. With so much to offer in the forest, it is imperative that the people of the country work hard to make the forest festival a success.