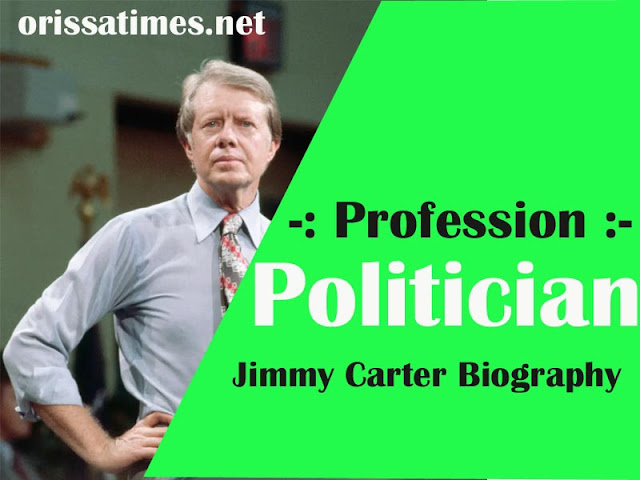 Jimmy Carter Biography: Jimmy Carter (Full Name: James Earl Carter Jr.), (born October 1, 1924) is an American politician who was the 39th President of the United States from 1976 to 1980. Before becoming president, he served in the United States Navy, served as a senator in Georgia, and was governor of Georgia. After the presidency, he was associated with human rights organizations and philanthropic organizations. Jimmy carter in 2002 awarded for the Nobel Peace Prize for peace.

Jimmy Carter was born at Vice Clinic Hospital in Plains, Georgia, where his mother, Lillian Carter, was a nurse. His father, Earl Carter, had a farm in which he grew cotton and peanuts. Jimmy’s younger sister Gloria was born in 1926, Ruth in 1929, and younger brother Billy in 1937. In 1941, Jimmy graduated from Plains High School in the tenth grade. Started studying in college. In 1942, he left this college and joined the Georgia Institute of Technology. He joined the US Naval Academy in Annapolis, Maryland in 1943, and graduated from there in 1946. After passing, he served in the United States Navy’s first test submarine.

Upon the death of Jimmy’s father, Earl, in 1953, Jimmy returned with his wife to Georgia, to take over the father’s farming business.

Carter was elected in 1962 for the Georgia Senate. In 1966, he contested for the governorship of Georgia but did not win. In 1971, he again ran for Georgia’s gubernatorial election and won.

In 1977, he became the 39th President of the United States. The following major events occurred during his tenure as President:

At Camp David in 1978, Carter negotiated an agreement between Egyptian President Anwar al-Sadat and Israel’s Prime Minister Menakham Begin, which resulted in peace between Israel and Egypt in 1979.

In November, during Iran’s Islamic Revolution of 1979, militant students took over the US embassy in Tehran and more than 50 Americans were taken captive. When Iran and the United States could not reach a diplomatic solution, in 1980 a failed attempt was made to free the captives by military force, in which American soldiers were killed. The bandages were finally released after 444 days in 1981.

After the Soviet Union invaded Afghanistan, Carter ordered that players from the United States boycott the 1980 Summer Olympic Games in Moscow. He ran again in the presidential election in 1980 but was defeated.

Since the end of his presidency, Carter has worked with many human rights organizations, and with many philanthropic organizations. In 1982, Carter founded the Carter Presidential Center at Emory University in Atlanta, Georgia, which deals with democracy and human rights.