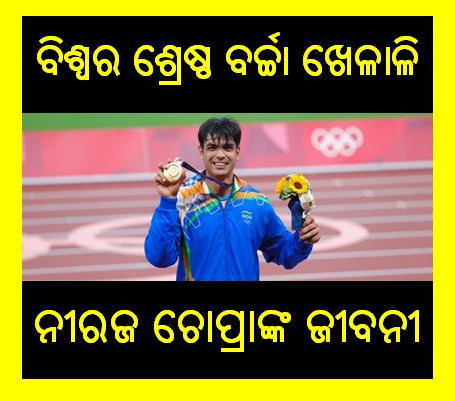 Niraj Chopra was born on December 24, 1997 in a small village called Khandra in Panipath district of Haryana. He was studying at DAV College in Chandigarh but later did his graduation at Kurukshetra University Haryana.

Niraj’s father’s name is Satish Kumar Chopra, he was a farmer and his mother’s name is Saroj Devi. Niraj has two younger sisters The two sisters are Sangeeta and Sarita His family has more than 17 members.

Career : He first practiced the spear game at the Sai Authority of India, Haryana. He then practiced at the Tau Devi Lal Stadium in the Athletics Nursery. He competed in the National Junior Games in 2012 and had a record of 68.46 m. He then continued his practice at the National Sports Institute, Patiala.

He then took part in a number of national and international spear games, from which he won several medals, including the Asian Games, Commonwealth Games, and more.

He had the opportunity to play in the World Youth Championships in Ukraine from the Guntur National Youth Championships and also in the national Kerala. In 2016, he joined the Army as a JCO (Junior Commissioned Officer) At the opening ceremony of the Asian Games in 2018, he had the opportunity to hoist the national flag. He later qualified to take part in the 2020 Tokyo Olympics. He was coached by his coaching Nazim Ahmed, class batoniz Gary Colbert and Werner Daniel.