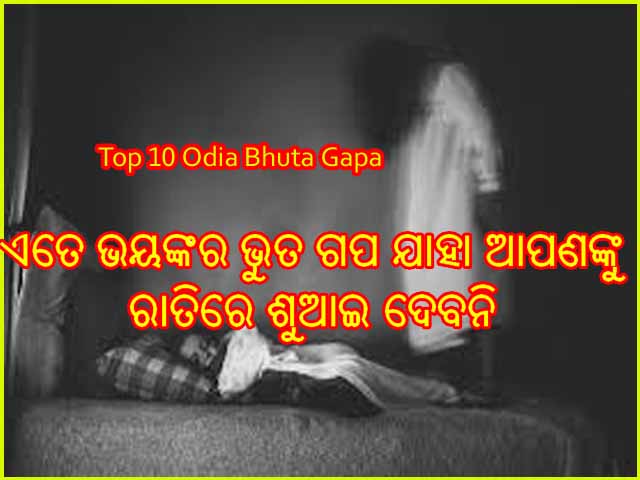 Odia Bhuta Gapa : Ajay’s friend Sahadev has repeatedly called on him to leave the city and return to the Shimlipal forest for a few days, but Ajay did not have time for all this. Where to go if you are busy with banking and writing? Sahadev is a childhood friend. After graduating from the same school and college, he joined State Bank and studied medicine at Burla Medical College. Now Sahadev has been posting for 2 years in Helani Shimlipal area. Ajay’s writing practice has been around since college.

He excels in composing mystery and thriller stories. Many of her stories have been featured in various magazines. Sahadev is also a big fan of his writings. Sahadev has repeatedly called on him to “come here and see if you can find a good plot for your story in this mountainous forest surrounded by hills.” After saying no all the time, this winter, in December, Ajay thought that he was going to Sahilev to go to Shimlipal. He drove from Cuttack to Shimlipal.

The vehicle is passing through the valley road. The beauty of the forest envelops him. He called Sahadev before the car reached the bus stand. Sahadev arrives in the car and waits for Ajay at the bus stand. The bus arrived. The two friends met four years later. The two men in the car went to the government quarters. The two friends talked for a long time. Sahadev’s outing is well underway by next February. After eating and drinking at night, the two friends fell asleep.

Sahadev got up in the morning and had breakfast and went to his clinic. Ajay was told what was going on. After Sahadev leaves, Ajay holds a book in his hand and sits in the lawn in front of the quarters, enjoying the winter mornings. At this point, Sahadev’s peon was brought and brought to the newspaper with a cup of tea. And again, these would mean that you have to spend for these processes.

After a while he would come and prepare food for the bad weather. With that said, shortly after he left. A very old man came and opened the gate. He saw Ajay and greeted him. Ajay Bhavila must have been a patient of Sahadeva. That’s why he told her, “Sir, you’re not home anymore. You come in the evening.” After saying this, Ajay turned his attention away from him and sat down to read the newspaper and did not pay attention to it.

Shortly after the newsletter was leaked, the man came and stood by Ajay. Ajay was shocked to see her. There was a strange smell coming out of her body as if she hadn’t bathed in a long time. This time, Ajay said with a sigh of relief, “I told you not to go to the clinic now. You will go to the clinic in the evening. “I didn’t go to the doctor,” the man said in a strange voice. I have come to you. ” With that, he coughed. At this, Ajay got up from his chair and said, “Who are you?”

What do you have for me? ” “Are you Ajay Mohanty or a famous storyteller?” My last wish is for you to tell the world the story of my life. ” Ajay was frightened and said, “How did you know I was writing?” The man said, “I don’t have much time to listen to what I have to say.” He told Ajay to sit down and sit down and start talking.

My name is Raghunath Das. I came to this Shimlipal forest under the age of 15 as a forest officer. I was given a quarter to live in and a peon shambhu to talk to. Shambhu took great care of me so that I could eat and drink, and he always took care of me so that he would not have any problems. Gradually I developed a good friendship with Shambhu. But a few years later, I noticed a difference in Shambhu’s movements. I noticed that he would sometimes steal money from my pocket and play with my belongings in my absence, which I did not like at all. One night I saw him go alone and learn a lesson. I warned her about it. I said if you have something to do, don’t stay with me.

With that, I told her to leave home. He was very angry with me. I became vengeful. One night, he suddenly got angry and came to me with a knife. I saw her wearing a red scarf on her head. A tiger is wearing a fur coat at the waist. The twinkling of an eye turned red as if a soul had entered his body. Her tone has also changed. How a man and a woman roar in unison. I’m so scared to see her. When he came to me with a knife, I sat on his arm and sat down. I hit her on the head with a stick. After eating the rock, Shambhu stumbled there.

Her head was cracked and she was bleeding profusely. When I saw him fall, I picked him up, and when he left, he roared at me again and said, “Raghu Das, if I had killed you today, I would have done it, but you killed me and interrupted my fulfillment.” I’m leaving today, but remember, as long as you live, I will not keep you in peace. I will always be with you in the shadows. I will take care of everything you get up, sit down and sleep. And in a year, I’ll bring it back to me. “

After saying this, Raghu, who was sitting next to Ajay, suddenly stood up and started to cry. Raghu pointed his finger towards the gate. Ajay is not visible. But all of a sudden, a bunch of dogs started barking In the voice of demons This time, Ajay was shocked. Even in the winter of December, he is sweating profusely.

“Tomorrow is the anniversary of Shambhu and the last day of my life,” Raghu said. Please bring my story to the attention of the public as it is because people still misunderstand why I killed Shambhu. And hiding from the police, I also became breathless.

After saying this, Raghu left. Ajay couldn’t sleep that night. He decided that the next day he would leave. He got up early in the morning and told Sahadev to take him to the bus stand and leave. Her phone rang that she had to leave today for some urgent work.

Sahadev took Ajay and put him on the bus. After a short walk on the bus, the driver suddenly stopped the bus, saying that there had been an accident in front of the crowd. Curious, Ajay got out of the bus to find out what had happened. He saw a man cut his throat and kill someone. But what about the man who came to her yesterday?

Her whole body froze in fear. Silently, he sat down in his seat. The road to come after some time, the road was cleansed after some time, the vehicle was cleansed to catch on Kitt. Along the way, Ajay is distracted by the thought. When he arrived home at night, he turned everything Raghu had said into a story and sent it to a good magazine. As he went to bed at night, he saw a shadow coming out of his house. The following month, Ajay’s story “Shadow” was published in a well-known magazine in Odisha.