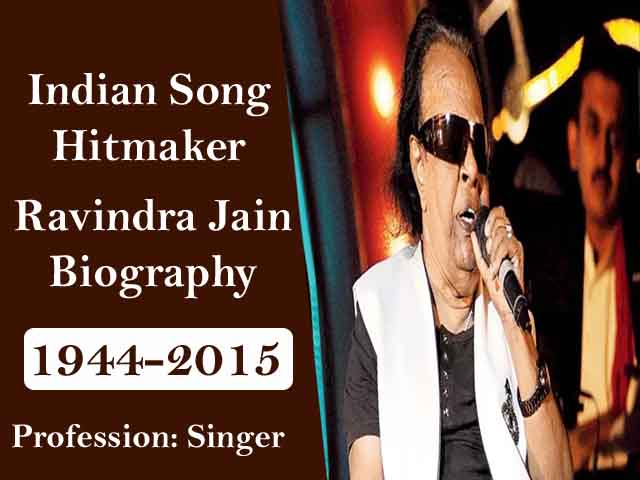 Ravindra Jain Biography: Such a mysterious blind musician, who kept seeing the world through the eyes of his own tune. This musician gave the world the gift of melodious songs at a time when increasing violence in films had reduced the scope for music. Yes, we are talking about Shri Ravindra Jain. Ravindra Jain was the name of a personality who gave many evergreen songs to Hindi cinema as a composer, lyricist and singer. There was no light in his eyes, but his music illuminated the world.

Shri Ravindra Jain was born on 28 February 1944 in Aligarh. Ravindra Jain’s father Shri Indramani Jain was a Sanskrit scholar and Ayurveda scientist. Mother’s name was Kiran Jain. They were seven siblings. Rabindra was their third child.

He studied at the Blind School of Aligarh University. When he was four years old, his father arranged for him to have music education at home. He learned classical music from Prayag Sangeet Samiti and obtained the degree of Sangeet Prabhakar.

Meanwhile, he also wanted to establish himself as a singer, but the most interesting thing was that Ravindra Jain was rejected during auditions in five radio stations of the country. Radhe Shyam Jhunjhunwala, the guru of Ravindra Jain living in Kolkata, wanted to make a film. Talk about if he took Ravindra Jain with him to Mumbai to give music for films, that year was 1969.

After this, for the lullaby, Ravindra Jain sang four songs by Lata Mangeshkar and one song by Lata and Asha. But Radhe Shyam could not complete the film. Still Ravindra Jain’s happiness knew no bounds, he got a chance to sing in the very first film with legendary singers like Rafi, Lata and Asha.

The first film released under the music direction of Ravind Jain was ‘Kanch Aur Heera’ (1972) in this film, Ravindra Jain again sang a song from Rafi Sahab whose lyrics were ‘Najarati Nahi Manzil’. This film failed at the box office, but Ravindra Jain did not fail.

Rajshri Production’s film ‘Saudagar’, which came in 1973, opened the doors of the fortunes of Ravindra Jain. The songs of this film ‘Tera Mera Saath Rahe and Sajna Hai Mujhe Sajna’ are still hummed for. After this, when Ravindra got a chance in ‘Chor Machaye Shor’ (1974), he sang a classic song from Kishore Kumar, ‘Ghungroo ki ke baajta hi raha hoon’.

After this, the chitchor and the windows of ankhis adorned with the music of Ravindra Jain made the whole country It was only after these films that Hemlata was seen as an alternative to Lata Mangeshkar. Do panchhi do tinke dekho le kar chale hai kahan hai song from Tapasya (1975). Song from Chitchor (1976), Jab Jab Tu Mere Samne Aane Aaye in Shyam Tere Kitne Naam (1977), When the restraint of the mind is broken, Ankhiyon Ke Jharokhe Se (1978), Geeta Gaata Chal (1975) and Dulhan Wahi From all the songs of Jo Piya Man Bhaye (1977) to Nadiya Ke Paar (1982), Ravindra Jain gave Hindi cinema music with melodious lyrics. The film was not only a hit but also a super hit on the basis of his music. He received the Filmfare Award for Best Music Director for ‘Chitchor’ (1976).

It was due to his popularity that BR Chopra left Ravi to give the music responsibility of Pati Patni Aur Woh (1978) and Insaaf Ka Taraja (1980) to Ravindra Jain. Not only this, a great filmmaker like Raj Kapoor whose films have different importance for their music. When he had to shun Laxmi Kant Pyare Lal, he also saw Ravindra Jain. In Ram Teri Ganga Maili, Prem Rog and Hina, Ravindra Jain never let Raj Kapoor’s decision prove wrong.

However, to maintain his existence in cinema, Ravindra Jain did many such films in which he could not leave the mark of his special talent. For example Hum Nahi Sudharenge (1980), Khoon Khuda (1980), Vengeance (1980), Yeh Kaisa Insaaf (1980), Kahaani Phoolwati Ki (1985), Mujhe Kasam Hai (1985), Maati Sacrifice (1986), Chain of Slavery There are many other films like (1987). But when he got a chance, he gave a melodious tune in his ears. His songs have become popular in Hindi films and there is a huge section of his fans.

In the film world, the rising sun is definitely setting, Ravindra Jain realized this, so in the mid-eighties, when not only Ravindra Jain, but big musicians like Khayyam, Naushad and Ravi reached the margins, Ravindra Jain gave music and songs in serials. Started writing. He decorated famous programs like Grandparents’ Stories, Ramayana and Luv Kush with his music.

He became very popular after giving music in Ramayana. He also came to be called the voice of God. As far as work is concerned, Ravindra Jain was as busy as he was in his golden period, even after thirty years he had no shortage of work. As a lyricist, he may have written less in films, but wrote fiercely for his hobby.

His collection of Ghazals was published ‘Dil Ki Nazar Se’. Apart from this, he translated Quran from Arabic language into Sahal Urdu language as well as he also did simple Hindi translation of Shrimad Bhagwat Geeta.

Recently, his book Rabindra Ramayana was published, not only this, his autobiography ‘Sunhare Pal’ has also been published. For the last few years, Ravindra Jain was translating Srimadbha Bhagavatam, Samaveda and Upanishads in simple Hindi, but time did not cooperate. Kidney disease had a profound effect on his creation and he died on 9 October 2015 due to this disease.

Major films in which the magic of his music captivated everyone