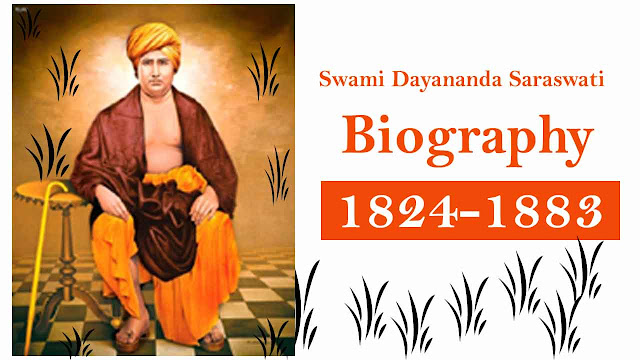 Swami Dayanand Saraswati Biography: The childhood name of Maharishi Dayanand, the great social reformer, thinker and patriot of India was Moolshankar. He was born in a prosperous Brahmin family in the year 1824 in Tankara village of Gujarat.

His father’s name was Karshanji Trivedi and mother’s name was Shobhabai. Moolshankar’s mind was more devoted to study and solitude. His early education took place in Sanskrit. He was a student with a sharp intellect and a remarkable memory.

After initiation, he devoted all his time to study and yoga. He received the knowledge of yoga from the master of Dwarka, Mahatma Shivanand. After this, Dayanand studied many texts like “Ashtadhyayi Mahabhashya” and “Vedanta Sutras” at the feet of Swami Virajananda of Mathura.

Swami Maharishi Dayanand opposed arrogance throughout his life. He wrote the great book “Satyarth Prakash”, in which his brief thoughts on religion, society, politics, morality and education have been given. In the year 1875, Swamiji founded the “Arya Samaj”. Its main objective was to raise the physical, spiritual and social voice of all human beings.

Swami Dayanand laid emphasis on the study of Vedas and Sanskrit literature. She also emphasized on women’s education. He opposed the purdah system and child marriage. Supported widow remarriage and remarriage.

He also openly opposed the feeling of caste discrimination, inequality and untouchability prevailing in the society. He established Hindi language to give high place to Sanskrit language and religion.

Swami Dayanand was a social reformer and protector of Aryan culture. The life lamp of Maharishi Dayanand, who wished for human welfare, was suddenly extinguished on the new moon day of Kartik in 1883. Swami Dayanand 19th. He was the inspirational person of the renaissance of century India. Our sincere salute to him.

Q. What was the name of Swami Dayanand’s Guru?

Q. In which family was Swami Dayanand born?

Ans. Swami Dayanand was born in a Brahmin family.

Q. Who was Swami Dayanand?

Ans. Swami Dayanand was the founder of Arya Samaj, a great thinker, social reformer and patriot of modern India.

Q. What was the original name of Swami Dayanand Saraswati?

Ans. The real name of Dayanand Saraswati was Moolshankar.

Q. What was the father’s name of Swami Dayanand Saraswati?

Q. What was the name of the mother of Swami Dayanand Saraswati?

Q. Who was the founder of Arya Samaj?

Q. When was the founder of Arya Samaj?

Q. Who is considered the founder of Swami Dayanand?

Q. Which book was written by Swami Dayanand?

Ans. Walk to the Vedas and Modern Indian Philosophy.

If you have some more information about Maharshi Dayanand Saraswati ki jivani or if you see anything wrong in the information given here, then do tell us immediately by commenting and emailing. We will update that information.